Only a few weeks ago it was announced that Ugly Bettie's a popular bar in Downtown Spokane would be closing and re-opening as something completely new with new owners. And now we know that the plans for the site call for a new Mexican restaurant to be called Borracho Tacos & Tequileria.
Construction work is already underway for the exciting new restaurant that will feature authentic Mexican dishes as well as house infused Tequila and house barrel aged Tequila. Exact dishes and pricing isn't known yet as the new restaurant's menu is not yet finalized but should be known in the coming weeks.

Live music will also be offered on a large outdoor patio complete with fire pit. The business is planning to open this fall. Most likely during late September or early October.

Borracho will occupy all of the fore mentioned former Ugly Bettie's building. The building and the new restaurant are located at 211 N. Division St in Downtown Spokane ( corner of Main & Division ). About a block south of the Convention Center. 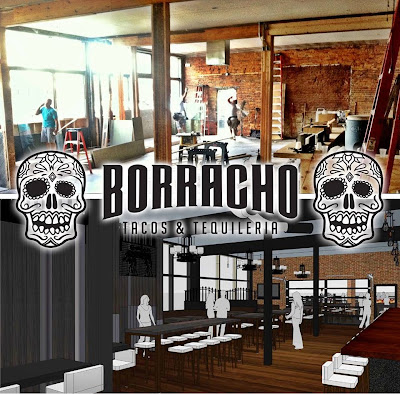 Photo: above- current construction work on the building
below- a rendering of what Borracho is planned to look like once open.
For more info on Borracho Tacos & Tequileria visit their Facebook page at-
https://www.facebook.com/borrachospokane
﻿
﻿
Posted by Matthew Behringer at 5:36 PM