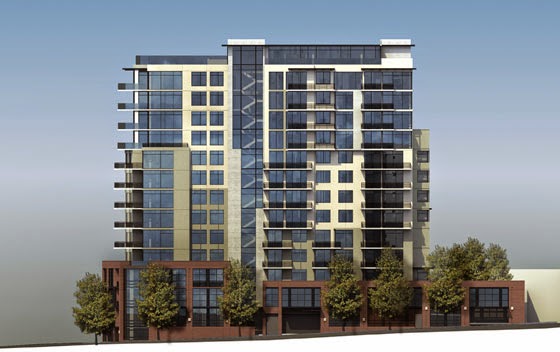 One Lakeside, one of the most controversial Coeur d' Alene construction project's almost seemed to have disappeared for a time. Mostly due to lawsuits filed by condo owners in the nearby Coeur d' Alene North condo building saying this new tower would block their view of Lake Coeur d' Alene.

But the legal issue seem to be over now and we're told One Lakeside will start construction later this year.

The developers web site indicates that the project's construction phase will start in the Summer or Fall of this year. The first phase of construction is expected soon with the demolition of the much smaller Lakeside Apartment Building currently on the site.

One Lakeside is being developed by Aspen,Co. based Austin Lawrence Partners with a pretty ambitious building plan. One Lakeside will be a 14 story high rise with 60 luxury apartments . The building's apartments will all be considered upscale urban living with apartment sizes ranging from 750 to 3,400 square feet.

To building will feature a private entry and parking area in addition to fitness center and a rooftop pool. In addition One Lakeside will have a commercial component with early plans showing some commercial space available on the ground floor and maybe even a couple other low floors but we aren't sure how much might be included as the primary purpose of the building is residential.