After entering the Inland Northwest market only a few years ago, the Utah based Maverik gas station chain has already grown to 4 locations around the Spokane / Coeur d' Alene area. And, now a new fifth location is already under construction on a site in Hayden. 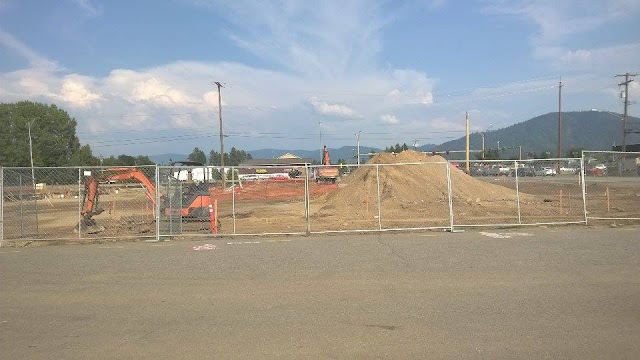 This is currently the only new location planned for our area and will be the second for the Greater Coeur d' Alene area. Maverik also has one at the intersection of Ramsey Rd and Hayden Ave. in CdA. There is also a rumor of a Maverik planned to open in Post Falls, which appears to be a false rumor at this time.

The Hayden Maverik will be on the northwest corner of US 95 and Hayden Ave on the vacant lot next to Rustlers Roost Restaurant. The new Hayden location should open toward the end of the year with a 4 to 6 month construction session. The new building will have about 4,250 square feet of space.

The store will be similar to other Maverik locations with multiple fuel pumps, a full modern convenience store and unlike some convenience stores, Maverik also hot foods served fresh under the Bonfire food name.

Maverik now operates over 250 locations, currently all in the Western United States.  Maverik is operated under the FJ Management parent company, who formerly owned the Flying J Truck Stop chain.

For more information on Maverik, visit their web site at-

Other area Maverik locations include-