Although some pieces of Larry H. Miller's local remodeling projects have been a bit controversial ( i.e. plans to vacate a public street, demolish a historic building ) the company continues to move forward with their several projects. Larry H. Miller has purchased some other small spaces adjacent to their campus for more selling space and are also doing work on their showrooms and office space. Here is what is in the works- 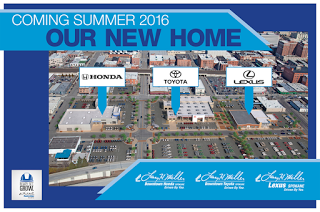 The new facility also offers a dedicated customer lounge and a larger service department then before.

The company's Toyota / Scion sales and service will move to where the Honda dealership had operated. This move will happen after a $6 million dollar renovation of the new location completes next year. The building will give the Toyota dealership about 50,000 square feet of total space.

The Honda dealership is currently operating a temporary location, across the street from it's future home as the construction project for the Toyota dealership begins before the Honda project.

Larry H. Miller entered the Spokane market a few years ago with the initial purchase of the dealerships in Downtown Spokane. Since, then the company has also acquired the former Hallmark Hyundai lot in Spokane Valley which today continues to operate as Larry H. Miller Hyundai at 8801 E. Sprague . The Hallmark dealership group also continues to operate, but now as 509cars.com on E. Sprague closer to Downtown.

Larry H.Miller is a group of several companies and dealerships around the West with a headquarters in the Salt Lake City area. In the Spokane market Larry H. Miller employs about 260 and does expect to hire more employees with the new bigger offices and showrooms.