New York City isn't the only place with an Empire State Building, Downtown Spokane is also home to a historic building with the same name. While Spokane's is named for our location in the " Inland Empire " and offers a smaller amount of square footage ( much smaller ), it is playing a big part in local economy.

The building , which is located at 905 W. Riverside Ave. , underwent renovations in the early 2010's . And, with the economy in better standing, some new office tenants are setting up shop within the building. But first a look at the building, along with some leasing information, for the several offices that are still available for your business- 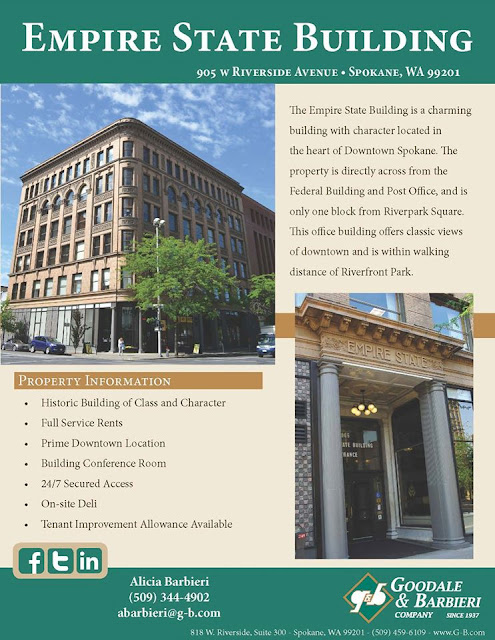 And, now here is a look at what business have opened in the Empire State Building recently-

Community Frameworks is leasing 2,700 square feet of office space, all on the first floor of the Empire State Building.

Millianna is a maker of fashion and high end jewelry, that's even had pieces seen on the hit CW show Gossip Girl. Millianna also operates an office in New York City.

Architecture / construction management / engineering firm OAC Services has opened a new Spokane office in suite 510 of the Empire State Building. The Spokane office will act as a satellite office to their other offices in Seattle and San Jose,CA. . The Spokane location also created a small amount of  new local jobs.


Posted by Matthew Behringer at 10:00 AM