The Iron Bridge Office Campus, an established site of premium class A office space located just a couple of miles east of Downtown Spokane is about to grow yet again. This as the site's developer, Kent Hull of KD Hull Corp., recently began the planning phases for two and possibly three new buildings on the north side of the campus.

The campus sits on approximately 23 acres of land along the Spokane River, bordered by Trent Ave on the south. It's existing four office buildings are already home to several large office tenants, providing hundreds of local jobs. And, two of these new buildings will be larger then the ones that are there now, with tenants lining up even before the dirt is turned.

The first new building to be built will be called Iron Bridge IV , with 90,000 square feet of office space. The new Iron Bridge IV building will face Iron Bridge Way with Erie St. dead ending into the new building's surface parking area. It will also back up directly onto the Spokane River with a plaza and café or restaurant space on the ground floor near the plaza. The plaza will be a concrete common area with access onto the actual " Iron Bridge " which the office complex was named after.

The Iron Bridge IV office building is still in the planning phase, but construction is scheduled to start in the early Summer with completion date planned for the first quarter of 2017. There have been no announced tenants for the new office space, but one large tenant is already signed on with several more eyeing the development.

KD Hull Corp. is also planning a third, smaller warehouse type building is also planned on a vacant lot just off of the office campus . That building has no set construction timeline and will be built at 703 N. Helena , corner of Helena & Springfield. More on that building as we get it.

For more information on the Iron Bridge Office Campus, and the available office spaces that are available for lease now, visit their website at- 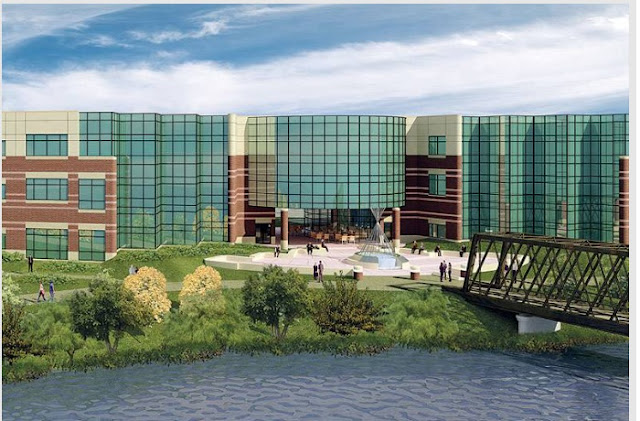 Posted by Matthew Behringer at 12:25 PM