Construction, hiring & employee training is wrapping up for the latest two restaurants to open in Northtown Mall. Outback Steakhouse & Bonefish Grill are those two restaurants, and they occupy neighboring suites in the newly renovated northern end of the Mall. They join a new Buffalo Wild Wings, which opened a few months back. 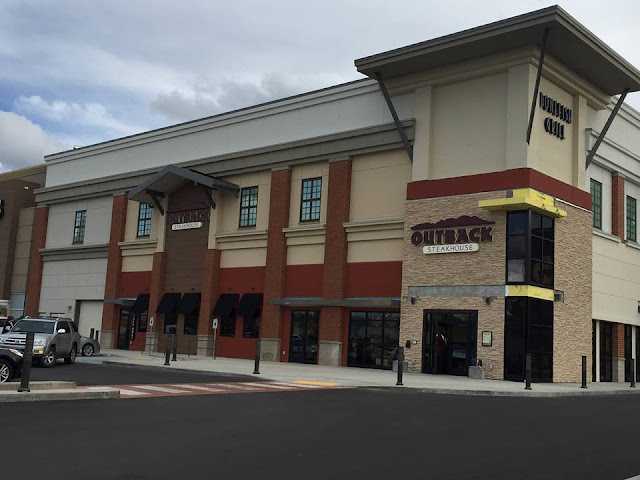 The Bonefish Grill is still coming soon, but Outback Steakhouse officially opened late last week. While Outback is new in Northtown, with a new look, it's actually just a re-location of an existing location. This Outback Steakhouse moved from a standalone building further north on Division, out front of Franklin Park Commons Shopping Center. There is no news yet about what business may take their old location, but with a new Trader Joe's coming to Franklin Park, it likely won't be vacant for long.

The new Northtown Outback Steakhouse is somewhat different then the original however, with a " Modern Australia " design and décor. The location is a franchise of the large restaurant chain, it's owned and operated by Evergreen Restaurant Group, who also owns Spokane's other Outback location nearby the Spokane Valley Mall.

The two new restaurants are also very unique to Spokane for a couple of reasons. One being, that Bonefish Grill has had no prior Spokane area locations. But also the way the two restaurants are set up is a new concept. Bonefish and Outback, have separate dining rooms and entrance's, but they share the same kitchen and office area. Between both restaurants they occupy just shy of 10,000 square feet and employ 175, many of which are newly created jobs, with the new brand opening.

Bonefish Grill is a growing restaurant chain that's owned by the parent company, Bloomin' Brands, the same as Outback Steakhouse and based in Tampa,Fla. . Bonefish Grill serves a menu of primarily seafood with American dishes. Although a soft opening is possible before, it looks like the new Spokane Bonefish Grill will open for business on Monday , March 21st.

And, for more information on Bonefish Grill, visit-