There's been rumblings of improvements coming to the block of Ruby & Division, in-between Ermina & Montgomery. But, no construction or set in stone plans ever surfaced, and they technically still haven't. But it looks as if we're getting closer to seeing dirt being turn, and maybe even new businesses opening their doors there.

Recently SDS Realty began marketing a new shopping center on the site, which would use most, if not all, of the city block for inline retail, pad sites and surface parking lots. Although this new development has a kind of Suburban look, it does match with the other national chain stores that dot the area nearby. The plan is still very new, so no official tenants have been announced, but it does have a good location. The project site is very close to Gonzaga, WSU Spokane and even Downtown. Plus, the project site boasts high traffic counts on three of the four neighboring streets. 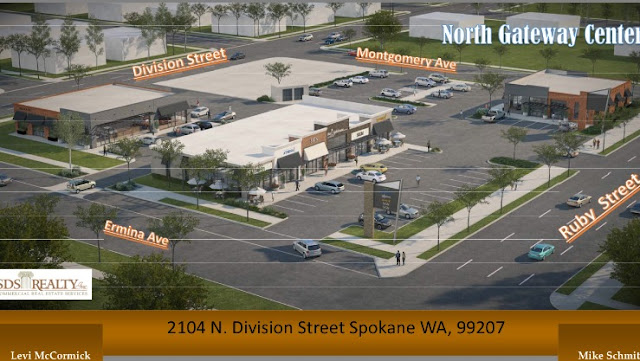 This new shopping center is, at least for now, being called the North Gateway Center. The plan calls for over 30,000 square feet of retail space, including some space with drive through capabilities. Because the suites could be combined, it's unclear exactly how many businesses may one day call the North Gateway Center home. There also is no news yet about when we might see actual construction .

Currently the block is occupied by some small local businesses, like a Gunsmith, Auto Repair / Tire business,  " Bargain Lot " used car sales and more. These buildings would need to be removed before anything could be built there, although most of the buildings have a dated look, and no residential buildings stand in the way. The site plan, also shows a gray area by the Bargain Lot sales center, so it's unclear if it's site would be included or not.

Leasing for the North Gateway Center has already begun and is being conducted by agents Levi McCormick & Mike Schmitz , both of SDS Realty. Lease rates are $22 - $28 per square foot and retail suite spaces range from 1,200 square feet up to 10,000 square feet.

For more information on this new shopping center project, and other retail spaces for lease in Spokane, check SDS Realty's website at-

http://www.sdsrealty.com
Posted by Matthew Behringer at 10:00 AM