Because of the large amount of new apartment complexes popping up in today's Spokane real estate market, I don't always get them posted on this site. But, there is one purposed apartment development that is so large it deserves a mention on this site.

In the Indian Trail neighborhood, on a " ghost subdivision " near the corner of Barnes & Pamela is where a developer is planning what would be one of, if not the largest apartment complexes in Spokane. Morningside Investments,LLC , with local developer Harley C. Douglass involved, are purposing building as many as 48 apartment buildings. The new, massive, apartment complex has yet to be named but may contain as many as 1,485 apartments. 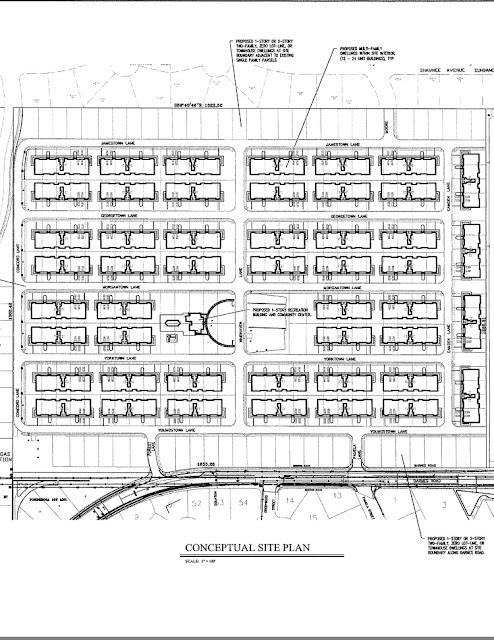 The plan is only " conceptual " and is still in the planning process. Many neighbors in the neighboring subdivisions have already raised issue about the huge complex. Their issues include the potential for more traffic in a already growing area, and the potential for more crime. Because of this, we expect to see this project in the news on and off in the coming weeks.
If built as the plan stands today, some other lots will be set aside for 2 unit apartment duplexes and a community center directly in the center.
Currently the infrastructure is already at the site as it was to be built out as a single family home development. The land is sandwiched in-between another subdivision and a large ( but not near a big ) apartment complex called The Lusinano Apartments. Here is the site on Google Maps-
﻿
https://goo.gl/maps/P25RdjQ6WN32

We'll keep watching for more on this project as it advances....


Posted by Matthew Behringer at 6:48 PM