Basically Spokane's only option for Brazilian cuisine , Rio Grill Brazilian Steakhouse, unfortunately has closed down their full service restaurant. That space, which is on S. Regal near 57th, has already started the transition into a new second location for Poole's Public House ( see previous post ) . But fans of Rio Grill don't have to worry as the business is not gone, just revamping.

Rio Grill is actually only closed temporarily as they transition themselves. The business is becoming a new place called Rio Grill Brazilian Express that will open soon at River Park Square in Downtown Spokane. 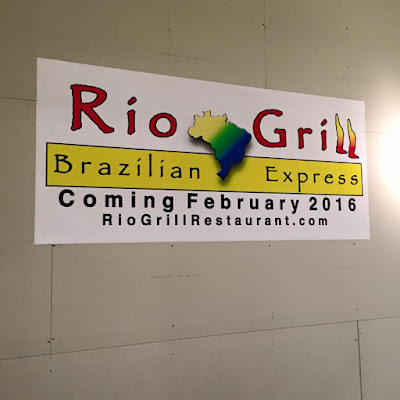 The new Rio Grill Brazilian Express is currently scheduled to open around the first of February and will be located in River Park Square food court on the mall's 3rd floor.
This new location will be, basically, a fast food restaurant but with much healthier alternatives . The new restaurant will serve menu items cooked on a churrasco grill, that rotates the meat frequently over an open flame. Menu items can be served as either an entrée or in salad form and all items are served fresh.
For more information on Rio Grill Brazilian Express, keep an eye on their website at-
http://www.riogrillrestaurant.com﻿
Posted by Matthew Behringer at 9:29 AM