While not leaving Spokane, Macy's has announced it will close it's landmark store in Downtown Spokane. The store, which has been a department store for many decades, was hit as part of another round of store closures by the Macy's chain.

The company plans to close up to 40 stores nationwide, including Downtown Spokane and another store in Moscow,ID . The store's last day will likely be in March and will result in lay offs for the stores just under 100 employees . 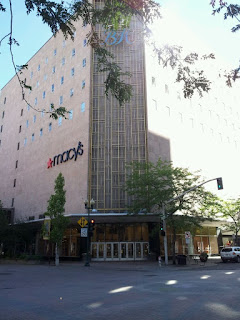 Macy's however will remain open for business in Northtown Mall , Spokane Valley Mall and Coeur d' Alene's Silver Lake Mall. This closure comes as the neighborhood around the Downtown store is seeing many improvements, like a Urban Outfitter store under construction right next door, and many new stores in the 400 block of W. Main.

The Macy's closure also leaves Downtown Spokane and River Park Square with only one department store, the Nordstrom store about a block north of Macy's. Because the closure was unexpected there is no news about what business or businesses may take over the retailers large 11 story building.
Posted by Matthew Behringer at 1:36 PM