The signs are now up and lit on the next chapter of the former Spokane House Hotel building. That building, which is located at 4301 W. Sunset Hwy has been undergoing a complete remodel since early Summer. The business owner, Pintu Bath , has invested millions in the building, which actually was empty for a short time. The five story hotel building was built in the 1950's and has played it's part in the city's history, with rooms and at one time a bar & restaurant.

As part of the remodel, the hotel has been rebranded under the Spokane based Red Lion Hotel brand. The hotel will now be called Red Lion Inn & Suites Spokane and is a mid level hotel with over 80 updated hotel rooms. It is also in a prime location off of I-90 at the top of the Sunset Hill, it is also in a convenient location for travelers using Spokane International Airport, with the terminal being only a couple of miles to the West. 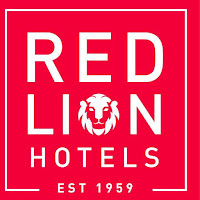 Pets are also welcomed for a small fee.

Despite the hotel once having a restaurant in the building, the new web site shows no restaurant, but several restaurants are within a easy drive from the hotel property.

This is one of two local projects for the Red Lion Hotel chain. This as remodeling is still underway in Downtown Spokane at the Red Lion at the Park, which is becoming a upscale Hotel RL branded hotel, a sister brand of Red Lion.

For more information on the new Red Lion Inn & Suites Spokane, visit their website at-

Posted by Matthew Behringer at 11:55 AM