Open for business in the former home of Heroes & Legends Sports Bar at 829 W. Riverside, has been a relatively new bar & restaurant, called 24 Taps. 24 Taps is a sports bar with a growing customer base. And, they must be doing very well as the restaurant announced a major expansion just yesterday.

They plan to expand the restaurant into the vacant storefront next door to their current location. 24 Taps will renovate the storefront, turning it into more dining areas. Also, the front of the building will be converted to a patio dining area called Patio 24. And, in a coincidence the new restaurant space will move the entry onto Lincoln, meaning the address will be 24 N. Lincoln.

The space at 24 N. Lincoln was for a short time a board game café, but has sat vacant for the last couple of months. Here is a look at what the new 24 Taps space will look like once complete- 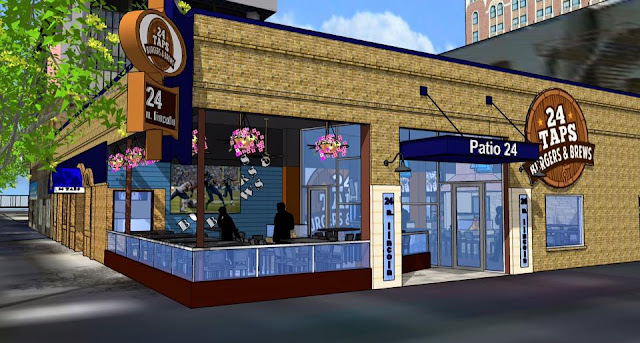 Construction will start very soon as building permits have now been issued, if it goes as planned the newly expanded space will open in April. 24 Taps is a locally owned and operated sports bar with 24 different cold beers on tap, many of them craft and / or local beers.

The food is a definite highlight of 24 Taps however, with many appetizers , sandwiches , salads and of course burgers. Customers will find many gourmet burger choices at 24 Taps, from the common to the rare like a poutine burger and a grilled cheese burger and more.

24 Taps provides a great place to catch most any sports game, with several TV's attached to the walls, airing most any game. It is also a great spot for a quick lunch as it's nearby River Park Square and some of Downtown Spokane's employers.

For more information on 24 Taps, visit their website at-

www.facebook.com/24tapburgersbrews
Posted by Matthew Behringer at 9:37 AM