Downtown Coeur d' Alene has small businesses coming & going all Summer long, many of which catering to the tourist industry that is huge in the Lake City. But, there will be two new business changes that are a bit more noteworthly then some as STCU ( Spokane Teachers Credit Union ) is for sure opening a branch Downtown and it looks strongly like Starbucks is also on it's way. Here is what we know-

STCU has leased the space that formerly house a Bank of America at 401 E. Front Ave. Suite 100 . The locally based credit union will remodel / re-design the space for their own uses. The STCU branch will occupy 3600 square feet and will be similar in size to their other new Coeur d' Alene branch in Crossroads at Coeur d' Alene development on Ramsey Rd.

The new Downtown Coeur d' Alene STCU will employ 5 -7 and will also have a drive though and a ATM . The location will be STCU's 20 location with 18 open now and a 19th opening in August in Spokane's Latah Valley area. Here is a look at the building STCU plans to open in, the building also houses a group of small office tenants on the second floor which are un-affiliated- 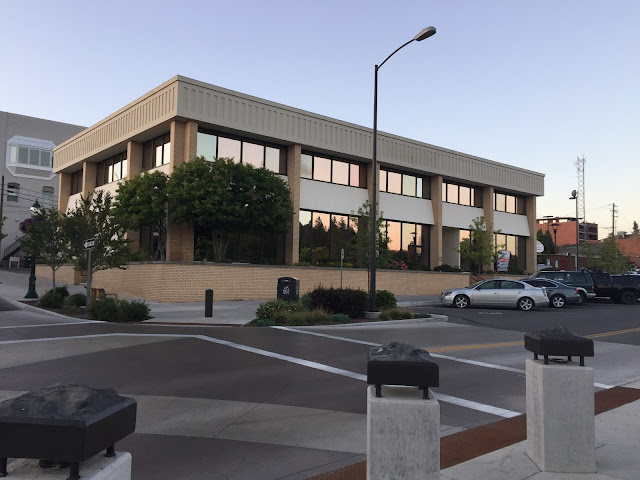 The Downtown Coeur d' Alene STCU branch should open late this year or early in 2017.

The planned Downtown Coeur d' Alene Starbucks location isn't as far along as STCU's branch but still looks to be coming to Downtown. The massive coffee chain Starbucks is currently working on developing a store off of what is today a convenience store with gas pumps.

Starbucks hopes to use the building, which is located at the NE corner of E. Sherman & 7th St. for a coffee shop with dine in and a drive though. There was some early debate with the City of Coeur d' Alene over allowing a drive though in a pedestrian friendly neighborhood but as of now the city's Planning Commission has ok'd that portion of the plan,

The new Starbucks likely won't open for sometime as a full remodel would be required and the tenative plans shows the new building owners also removing the gas pumps out front of the building, something that can also take time. The building has been a gas station for sometime and shared the Zip's name with restaurant next door, however that Zip's was recently re-branded as a Burger Express.

Also, Mountain Madness Soap is planning a big move onto Sherman by moving into the former Everson's Jewelry store and another business is working on the storefront next to the Garment District clothing store on Sherman. And, there is more but you'll just have to keep an eye on this site for the additional details...

Posted by Matthew Behringer at 10:15 AM