Downtown Spokane's Commercial Building to become hub for I502 businesses?

I always figured it was only a matter of time before the marijuana industry hit the main downtown core of the City of Spokane. And, judging by a recent ad on Craigslist that time has come. Last week a company called R.U. Holding,LLC started advertising a long time vacant building on the west side of Downtown as what appears to be a sort of hub for such businesses.

The building, which is known as the Commercial Building at 1119 W. 1st Ave. was home to a company called Blue Star Technologies and was to be used as production / office facility although it never took off and was later discovered to be a scam of sorts. The company was evicted and the building put up for sale. If this ad is correct it likely means the building was sold to this new holding company.

The ad's for the new space market it as 20,000 square feet of space with multiple suites for I502 marijuana businesses. Of those I502 businesses it is marketed to marijuana production and producers, the ad's also mention that a CO2 oil producer is already an on site tenant there. 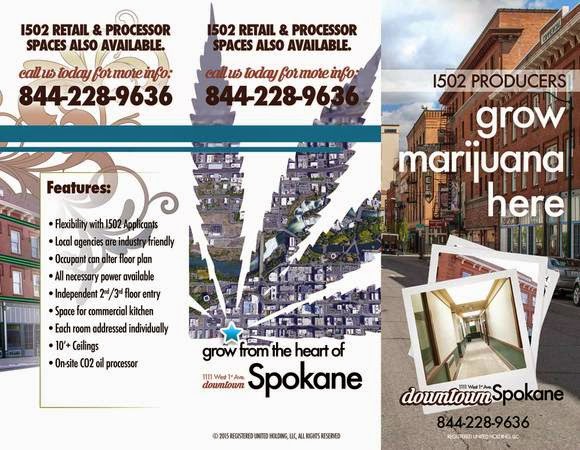 Likely most of the building will be closed off to the public and secured. But one space is being marketed for use as a business that would be geared towards the public. Some of the ground floor space facing W. 1st is to be leased retail marijuana store . This would be the first marijuana retailer in Downtown Spokane as the nearest retailer about 2 miles away.

This buildings location gives it a sort of one up on the local marijuana tourism scene as it is close by many Downtown hotels, entertainment venues and tourist attractions.
Posted by Matthew Behringer at 12:30 PM