Spokane Teachers Credit Union ( More commonly known as STCU ) continues to expand through out the Inland Northwest. In recent months the credit union has moved into a new branch / office space in Downtown Spokane's Historic Hutton Building and opened a couple of other new branches around the area.

But now, STCU, who's membership is open to all local's, not just teachers, has announced another new branch location planned in the Qualchan area just south of Spokane. The new Qualchan STCU branch will be a tenant of the Latah Creek Plaza shopping center, which is the center just off of US 195 anchored by a Trading Co. grocery store.

STCU will lease a former AmericaWest Bank branch that is already standing at 4233 S. Cheney-Spokane Road. While the building may already be standing, STCU will actually extensively remodel the building making the building nearly double the size and with the same craftsman style architecture used in many of the newer STCU locations. 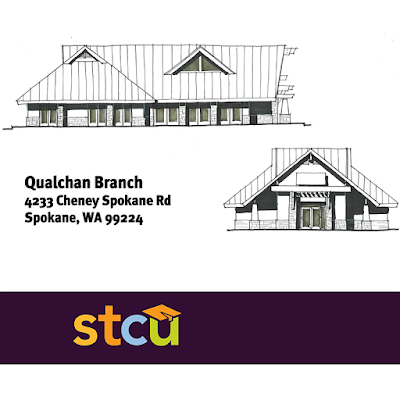 The new branch will be STCU's 19 branch location and will open for business sometime next year with construction starting in late 2015. Dave Black and Chris Bell of NAI Black brokered the lease of this new building.
STCU is excited to come to this growing area and promises to bring great service and convenience to their members along US 195 and in the Latah Valley. The credit union is a member owned , not for profit cooperative, now with over 136,000 members and $2.1 billion dollars in total assets.
For more information on STCU visit their web site at-
www.stcu.org
﻿
Posted by Matthew Behringer at 9:00 AM