Follow up on new restaurants coming to Northtown Mall 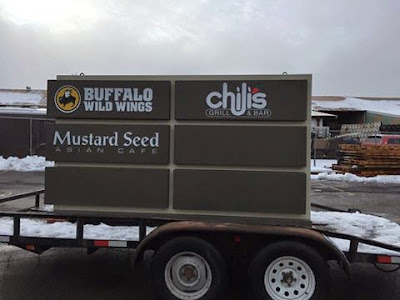 Buffalo Wild Wings is planning to open their new restaurant at Northtown Mall in June. It will employ about 130 and hiring is already underway. This will be Buffalo Wild Wings second location in the Spokane area as the chain also has a location on Indiana Ave, just west of Spokane Valley Mall.


Outback Steakhouse looks likely to be relocating to Northtown Mall

A new Outback Steakhouse would replace the location at Franklin Park Commons shopping center a few blocks north of Northtown. We're told their lease is up at Franklin Park and have decided to simply move.

This could be a sign of future renovations at Franklin Park as well as that shopping center is where the new North Spokane Trader Joe's is coming.

It's a very strong rumor, and if The Cheesecake Factory chain was to open in Spokane, Northtown Mall seems like a logical choice.

But at this time we cannot prove nor deny that The Cheesecake Factory will open a location at Northtown. In my opinion however it seems like could be true based on how many times I've heard this rumor and the fact that the chain already has locations in Washington State.

The rumor of a Dave & Buster's coming to Northtown Mall seems to have died down but could be true. All I know is that Dave & Buster is a rumor, but that it's at this time just that, a rumor.

With several locations around Western Washington the rumor of a Famous Dave's BBQ still exists around Spokane. However it has not been confirmed to be coming to Northtown Mall , we will keep watching this one as we do think this may happen.

If you can prove what restaurants and / or other new businesses are coming to the new section of Northtown Mall please contact me anytime, you can remain anonymous .

E-mail - Matt at inlandbusiness@yahoo.com
Posted by Matthew Behringer at 6:59 PM