Although the planning process is still ongoing, and actual building construction may not start on their site till spring of 2016. A franchise location of Freddy's Frozen Custard & Steakburgers is coming to Coeur d' Alene and has been confirmed by their corporate offices. 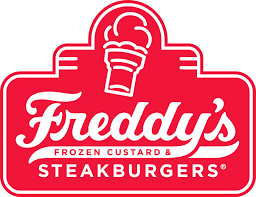 A preliminary site plan has been filed for a 3,583 square foot restaurant to be built just south of the Crossroads at Coeur d' Alene shopping center, nearby the corner of Appleway and Ramsay Road. A franchisee has also been secured and plans are moving forward.

At the present time this will likely be the only location of Freddy's Frozen Custard & Steakburgers in the Inland Northwest as no locations are currently in the works for Spokane. Although the company rep did say " we are growing quickly and hope to have the opportunity to serve the Spokane market in the coming years ".

Freddy's Frozen Custard & Steakburgers is a fast casual style restaurant chain based in Wichita,KS. . Currently they have 161 locations in 23 US States. All menu items are cooked to order and include premium ground beef steakburgers, Vienna Beef hot dogs and shoestring fries.  Dessert items are also big at Freddy's several treats prepared with freshly churned chocolate or vanilla frozen custard.

On a side note, Freddy's Frozen Custard & Steakburgers is not the only business planned to go on this site near I-90 and Winco. A location of Native Grill & Wings is also reported to be in the planning phase although we are still waiting to hear more from their corporate office. A Cracker Barrel is also believed to be planned there but no official site plan has been filed yet. Some site work has already begun with equipment on the site ready to go. We will continue to keep and eye on all of the restaurant developments here.

And, for more information on Freddy's Frozen Custard & Steakburgers visit their website at-

www.freddysusa.com
Posted by Matthew Behringer at 9:59 AM