The Blackbird opened for business back in early Summer this year, so I'm a bit behind in reviewing it, but still in my opinion deserves the mention. The Blackbird is the new, more upscale sister business of Manito Tap House on the South Hill. And, just like at Manito ( another favorite of mine ) beer has a strong focus, just not quite as strong. The Blackbird is also a green restaurant like Manito, but that's about where the similarity's end.

The Blackbird has a great location, on the ground floor of the historic Broadview Dairy Building at 905 N. Washington St. It's near Riverfront Park, Downtown and Spokane Arena. In fact it's the arena that finally got me here in the first place because we planned to attend the Shania Twain concert later that same evening.

I love the building, it's history is incredible and The Blackbird has honored that. The décor is basic, mostly black and white and not over the top. The Space itself is only medium sized but there is a pleasant outdoor dining area facing Washington St. . Given this on a busy night, like when I was there, it can become kind of loud inside. 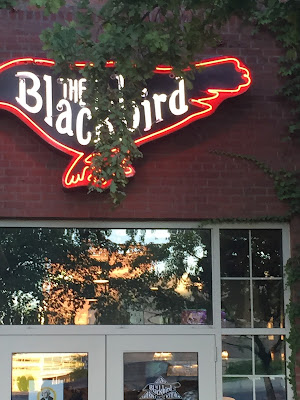 The Blackbird's menu is a bit different then most other restaurants in Spokane. Specials are almost always available and include things like the most recent Moroccan lamb ribs and carrot fritters. The main menu is also unique and delicious with both a dinner menu and a brunch menu. Brunch however is only served 8am- 1pm.

What's makes my day personally is the amount of meat dishes ( they do, however, have other options ) . Walking up to the building along Cataldo you can actually smell bacon cooking in the air. And, these aren't just regular plain burgers,etc... . The Blackbird serves up dishes like Brisket Sandwiches ,  Pork Belly and get this... bacon fat popcorn. Let me say it again.... bacon fat popcorn!

On my visit however, I choice to skip the bacon fat popcorn ( I'll be back for it though... ) and get the twisted pretzel as an appetizer. Surprisingly it's not twisted at all, but instead is small tower of soft pretzel sticks. Served hot and fresh with stout mustard and bacon mascarpone for dipping... 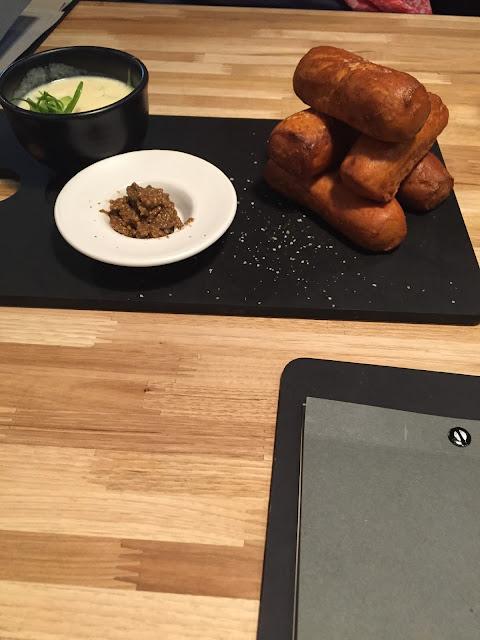 The pretzels themselves we're served, maybe even a bit too hot, but tasted great and we're perfectly soft. But onto the main meal...

Being a big lover of brisket, I naturally ordered the brisket sandwich. Unlike other restaurants sandwiches aren't served with any side dishes. But, I feel the sandwich served to me was plenty big enough and full of meat to not need a side. The meat was cooked just right and served uniquely on a cutting board, which you'll likely need because it's too long not to cut at least in half.  I would defiantly recommend getting this sandwich. 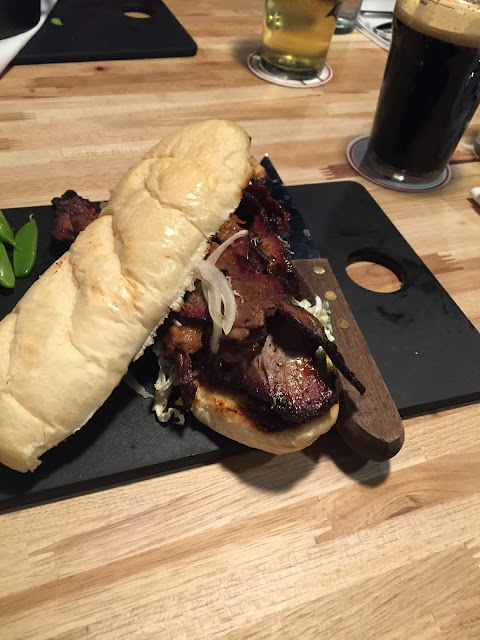 Note: The pea pods in this picture did not come with the sandwich. Instead it is served with house made pickles, me and my wife did a bit of a switch a roo. The peas come with the turkey pot pie, which is not a traditional pot pie. Instead it is more of a stew, with the crust only covering the top, inside is turkey, roasted carrot and onion. Here is look at that... 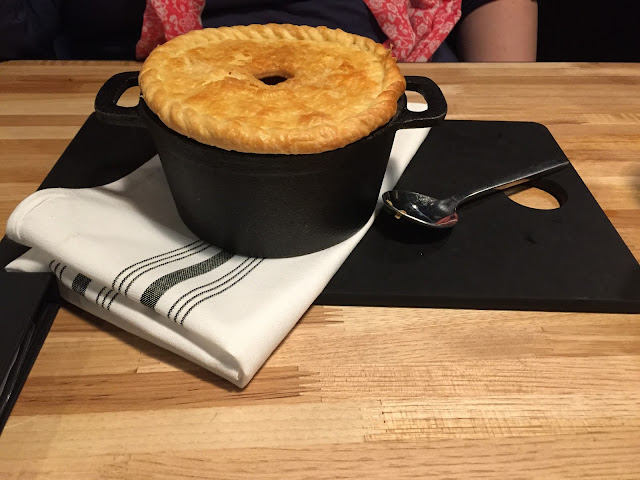 We did not divulge in any desserts during our visit to The Blackbird but most point out there are several offerings in that department. Including a bread putting with whiskey in it and much more.

Would I come back to The Blackbird Tavern & Kitchen, most certainly! It's a real treat to have a place like this in our fine city and wish them much success for years to come. Five stars for sure!

For more information The Blackbird, including a look at their menu, visit their website at-


Suggest future restaurant reviews, to Matt Behringer at inlandbusiness@yahoo.com. Only rule is the restaurant must be under six months old, food trucks OK also.