Only a couple of weeks ago it was announced that local developer, Jerry Dicker's Ruby Hospitality would be taking over ownership and operations of the Montvale Hotel in Downtown Spokane. The Montvale, the city's oldest hotel, has struggled since being effected by another developers bankruptcy, it's two restaurant spaces have sat empty in recent months.

But, with the recent sale to Ruby Hospitality it was announced both spaces will soon be re-filled. The space next to the hotel lobby will become a coffee shop of some sort. And, now we know more about what will take the basement space, that was last Catacombs Pub ( 110 S. Monroe ). 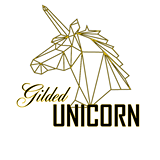 Gilded Unicorn appears to be a project of well known local chef Adam Hegsted, the same name behind The Wandering Table and Yards a Bruncheon in Kendall Yards.
We are waiting to here back about when Gilded Unicorn will open for business, but we do know it will offer a full bar and a decent size food menu. An early look at the menu reveals mostly American dishes with somewhat unique twists. Everything from sandwiches, entrees, salads and smaller appetizer type dishes.  A drink menu had not been published as of yet.
Gilded Unicorn will be open seven days a week, Mon. - Thurs. 11:30 am - 12:00 am , Fri. & Sat. 11:30 am - 1:30 am and Sun. 8:00 am -2:30 pm ( perhaps for a Sunday brunch service ? ).
Gilded Unicorn's website is still a work in progress ( as of the time I am writing this ), but will be able to be found at- www.gildedunicorn.com
And, they can be found on Facebook at-
www.facebook.com/gildedunicornbar
﻿
Posted by Matthew Behringer at 11:37 AM