The new Winco Foods grocery store at the corner of Appleway and Ramsey Rd. looks to be acting as a bit of catalyst for new development in their part of the City of Coeur d' Alene. While much of Winco's attached retail center ( Crossroads at Coeur d' Alene ) remains empty the area around it is starting to change. A new apartment complex is now open next door and some sort of new development with restaurants is breaking ground on Lee Ct. just feet south of the store.

But, now another new development is being tossed in the mix as signs have went up for another new retail strip mall only a couple of blocks east of the Winco / Crossroads site. The new shopping center is relatively small and has no official name as of yet. But, it will occupy a site that has been vacant for sometime. The new center will go in-between the Top of China Buffet and Carpet One on Appleway, here is a look at the site- 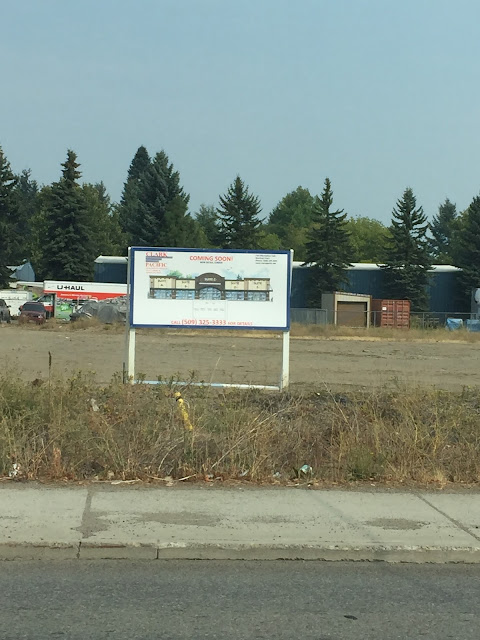 The new shopping center has no tenants lined up as of right now, but based on successes at some other area developments it likely will gain some as the marketing process goes on. Leasing / marketing of the center is being done by Clark Pacific Real Estate of Spokane and information can be found on their website at http://www.clarkpacific.net

Spaces in the new center are open to most any kind of business- retail, restaurant or service and all spaces are similar in size and are all inline. The middle space will be the largest with 1,960 square feet and all others in the 1,750 square foot range. The marketing flyer also shows a drive through option on the end cap space.