It's been speculated that the Native Grill & Wings restaurant chain was planning to open a location in Coeur d' Alene. And, now we have confirmed that they are coming straight from the company's corporate offices. However, don't expect them to open here for some time.

That's because, the company rep. explains that they are still in the planning progress. The restaurant will be a franchised location and will likely be built off of Appleway just south of Winco. The rep. says they have a six month time frame to open, so perhaps opening in the Spring (?). Some construction work has already occurred on the currently vacant site with what looks like a parking lot or small street going in. Native Grill & Wings will be joined by a Freddy's Frozen Custard & Steakburgers and possibly a Cracker Barrel Restaurant all on the same block in the near future. 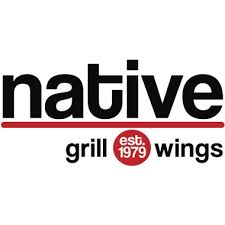 Native Grill & Wings is a growing chain of restaurants with their main focus being on chicken wings. They are an Arizona based company that began as Native New Yorker Restaurant , until a name change and rebranding just last year. Currently they operate locations in three US states and the menu changes a bit by region but is still mostly wings, burgers, pizza, sandwiches and more. Cold beer is available on tap as are several specialty wing sauces.
The new Coeur d' Alene Native Grill & Wings location will be the only location in the area as none are planned for Spokane at this point in time. The building size and amount of new jobs created has not yet been released as of this posting time.
For more information about Native Grill & Wings, including job and menu information, visit their website at-
http://nativegrillandwings.com﻿
Posted by Matthew Behringer at 10:39 AM