Major redevelopment coming to the Heritage North, by the Y

While not a sure thing as of this posting, a predevelopment conference has been held with the City of Spokane to undertake a major redevelopment at a North Spokane shopping center. That center is the older Heritage North Shopping Center on N. Newport Hwy in between Holland Ave. , and the new Heritage Village Shopping Center, just North of The Y .

Despite a few vacancies the Heritage North Center has been home the several small local businesses. But, under the plan, the existing center, located in two separate buildings would be demolished and replaced by a new building with a small group of national tenants. The plan calls for the new building to have three tenants with the building facing the Newport / Holland intersection, instead of just Newport Hwy as it does now.

Likely because no permits have been issued yet there is no news about what all the existing business there will move too. We hope they are able to move, as most are small businesses. Although the news is vague about the existing businesses, what business are going in there looks a little more clear. Although we're unsure if leases have been signed , etc... but, these business do add up. The business planned for the new Heritage North are- 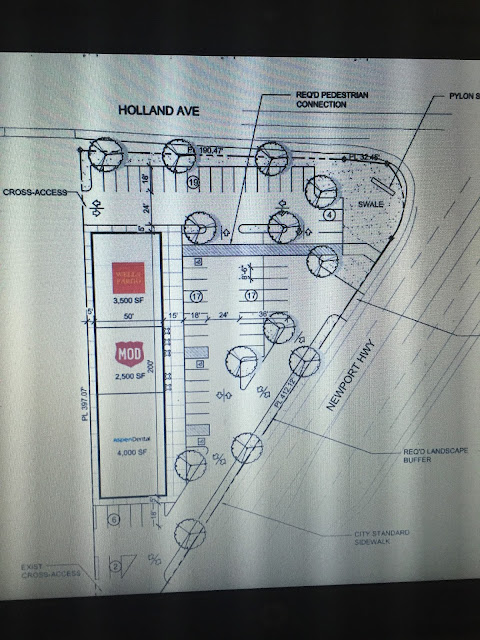 The new building will be about 10,000 square feet with a new surface parking lot. Construction is expected to start in the near future, watch for updates on exactly when and a completion date. The center seems to be fully leased, however the leasing work is / was done by NAI Black. It's not the only new development in the area as another new shopping center is now open directly across Newport Hwy, next to a Cheveron gas station.﻿
Posted by Matthew Behringer at 11:00 AM