With an entire block of Downtown Spokane now under construction it's hard to miss the site of the purposed new hotel tower being built directly across Spokane Falls Blvd. from the Spokane Convention Center and INB Performing Arts Center. But while many know of this project, few know what the hotel will look like.

Last month a rendering of the hotel was released , Inland Northwest Business Watch learned that photo was out of date and waited till a new rendering was released. And , I am now happy to say we now have that new rendering, and here it is... 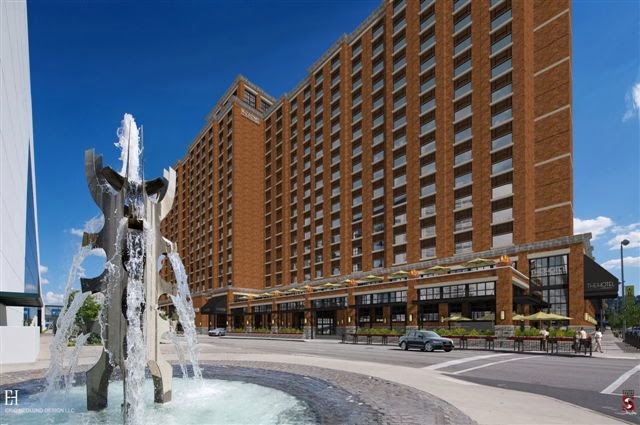 The new hotel , which has been going by the name " Convention Center Hotel " is being developed by Worthy Group , a local firm owned and operated by Walt and Karen Worthy. The Worthy's own a number of local properties and most notably The Davenport Hotel Collection also in Downtown.

While the hotel is using the name Convention Center Hotel at the present time, The Worthy's plan to align the hotel with a yet to be named national hotel brand. The project is on the former site of the INB's primary surface parking lot directly across the street from the Performing Arts Center and about a block from the Convention Center. The hotel will also feature a direct connection to both directly.

Here are the main features of the hotel , at a glance :

-High rise hotel tower with hotel rooms on the upper floors and space for a restaurant or restaurant's as well some retail space on the lower floors.

- 70,000 square feet of meeting space including a 19,000 square foot ballroom and over 25 other meeting rooms in a variety of sizes.

It is important to note that while the new hotel will in the long term increase the amount of parking spaces in this part of Downtown. The construction itself has this block of parking now closed, a few other lots and garages are nearby but are farther away from the Convention Center / INB.

Posted by Matthew Behringer at 4:56 PM